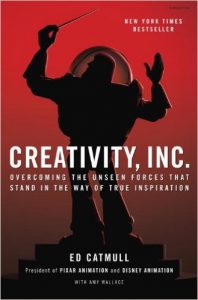 While hunting for a book on Roy Disney, my rabbit trail led to this book by Ed Catmull, President of Pixar Animation and Disney Animation. Part biography, part company history and part management guide, he’s generous in recounting failures as well as successes. Anyone who manages creative folks will surely find ideas worth pondering. A few nuggets:

If you’ve seen many of the Pixar films (and who hasn’t?), the anecdotes along the road to film production are a lot of fun. Personally I was amazed at how they’re willing to take interesting ideas, deconstruct them, rebuild with almost nothing remaining from the original concept and then set the box office ablaze. Of the original pitch for the film “Up,” only two details survived this process: the title and the tall bird.

“Our American Family” can now be viewed via Amazon Prime
March 8, 2017