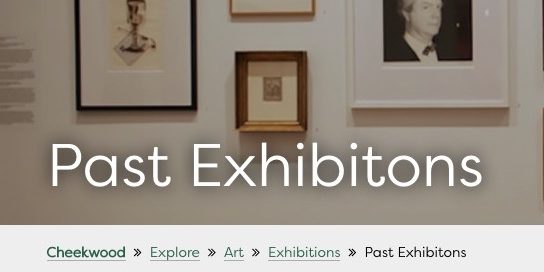 The screen capture above is from Cheekwood’s official website. I might have expected less from a used tire store but not this bastion of culture and sophistication. (After it was noted, the spelling was corrected.)

What does it say about you or your company if errors slip past? You’re careless? You’re moving too fast to give your writing a second look? You don’t trust anyone to critique your writing? Or worst of all, you just don’t know any better?

Reading the daily paper, there’s something amiss almost every day. Following the Super Bowl, I encountered a bold headline: PHILADEPHIA WINS. Do you see what’s missing?

And the next day a subject/verb agreement bobble: “A rainbow of brightly-colored neon lights were overhead.” Break it down and it becomes “rainbow…were?” Nope.

I usually give a pass to casual writing. With business-to-business writing in this competitive marketplace, a mistake might be enough for someone write you off. The pain of the mistake magnifies when you think of the time, money and effort invested in communication. Perhaps it is enough to put a dent in your company’s shiny reputation.

As a freelance writer, I realize I often see things that others don’t. I’m old-school enough to diagram sentences in my head. I consult Strunk and White’s Guide. I ask my mother-in-law who wears a t-shirt that reads “I am the grammarian about whom your mother warned.”

Before you become the emperor stepping out in public without clothes (or commas), read the words aloud. Let one or two or six other people read it. Or hire someone whose brain is hardwired to look for mistakes and correct them before they move beyond your computer screen.

I’m more than a spellchecker and a grammarian. For freelance writing in any form, contact me at Michael@MichaelNolanWrites.com.